These instructions illustrate how to disassemble and assemble the Autolite 1100 choke plate. It is important that the choke plate move freely, otherwise your choke will not operate as required and perhaps causing hard starting or rough running in cold conditions.It is a good idea to take plenty of digital pictures in case you need something to refer to when putting the choke valve back together.

The 1st thing you want to do is make a mark on the choke with a scribe so that it gets replaced in the same position. 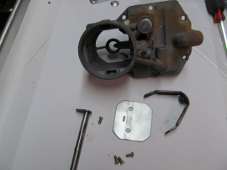 Remove the two retainers that hold the air cleaner bracket onto the carburetor. Take your time removing these screws as they are very small and will break easily.

Here are a few tips that might help you remove screws that are stuck or perhaps have worn heads making it difficult to remove with a screw driver.

1st be sure you are using a good screw driver with a blade that fits the screw head slot as full as possible. When the screw slot is malformed, or worn, one trick is to hit it with a hammer which will flatten it somewhat making the slot cave in and hopefully fitting the screwdriver more tightly. Always put something on the other side of the screw to absorb the impact. You don’t want to break the carburetor. Use common sense on how hard to hit the screw. Remember these are small screws and are made of soft metal. This tip also works well when the screw seems to be frozen. Hitting the screw just might loosen it up. When all of this fails, then the only thing left is to drill out the screws and tap the hole out.

Remove the two screws that hold the choke plate in position. These screws may be mushroomed on the threaded end. We use a dremmel tool to grind the threaded end down flat. The screws will usually come out without any problem.

Now that everything is apart, clean your parts and get ready for the reassembly. We use a wire wheel for buffing the small parts. You want the parts as clean as possible so that they move as free as possible. Any sticking can cause a choke to not function as it should.

Slide the choke shaft into the carburetor. Position it as shown, then turn the shaft toward you until the slot is straight up and down.

Slide the choke valve in as shown. The screw holes should be as shown, with the cutouts facing you. Made sure your original scribe mark is positioned correctly. 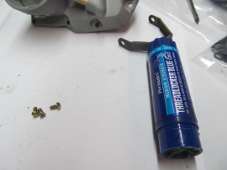 Install the two screws that hold the choke plate on. Be sure to use some thread lock so that the screws don’t come out and fall into the engine. Before tightening the screws down move the valve around until it fits snugly, then tighten the screws. 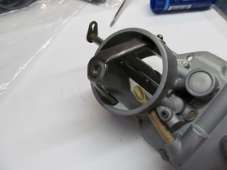 The last step is to install the air cleaner bracket back on, using retainers. Check everything over to make sure nothing was missed and that everything moves freely. 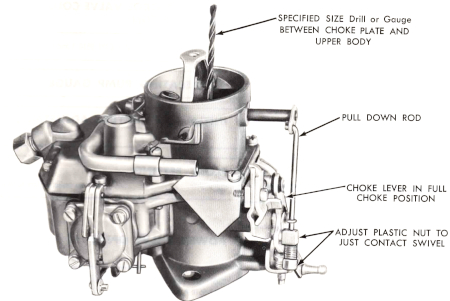