This video describes how the Autolite 4100 works:https://www.youtube.com/embed/43IoNVZd_PE 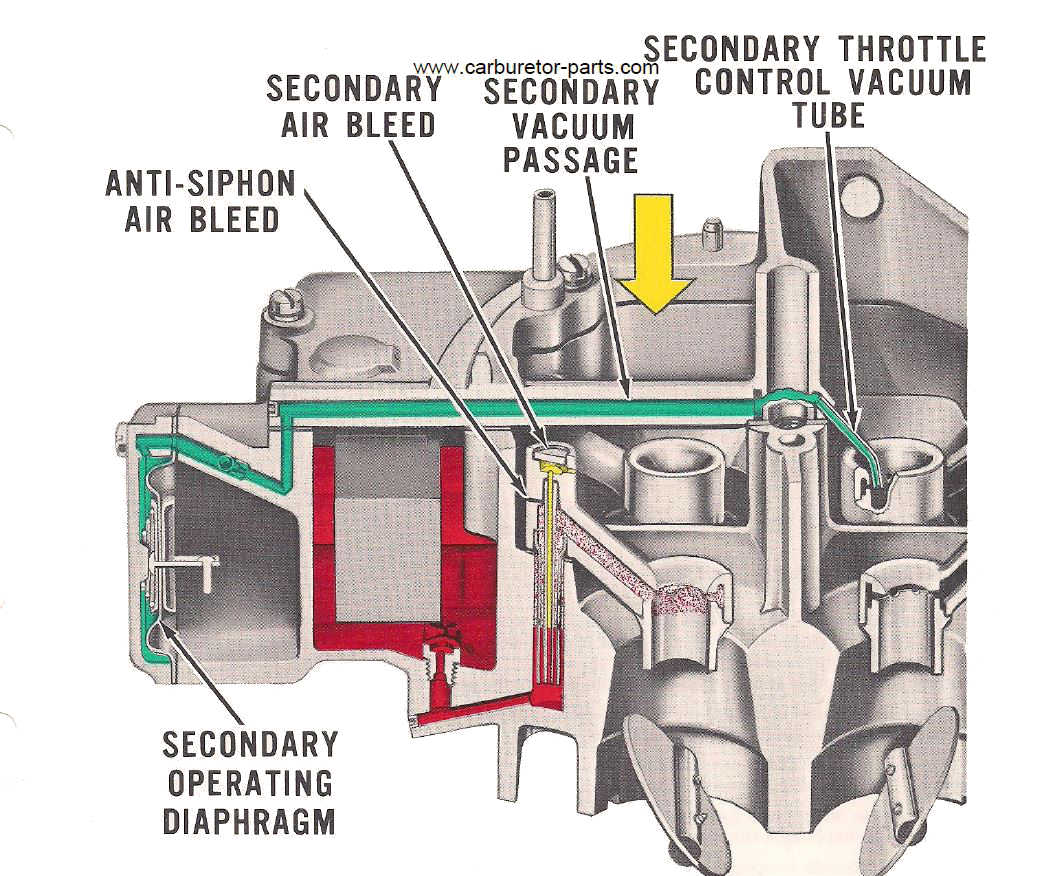 As the primary throttle valves are opened the vacuum at the venturi increases. When vacuum reaches a certain point the secondary operating diaphragm kicks in.

There is a check ball located in the secondary vacuum passage which controls the rate at which the secondary valves are opened. Note that this check ball is often missing and some carburetor people don’t think it is necessary. At minimum check to make sure if you have this check ball that it is loose. They do get corroded and stuck. When stuck, apply heat to the outside of the housing while tapping the carburetor on the bench. The ball will eventually fall out.

A warped 4100 main body could affect the secondary vacuum passage and gas can enter the venturi area from the fuel well.

Ford 4100 secondaries are vacuum-operated via a diaphragm. If the secondary positive closing tang (which is a flimsy nylon pin IIRC) is broken off, then yes they can be opened easily when the engine is off.
When the engine is running they may indeed be harder to move due to the increased low-pressure area below them; I can’t really say for certain but it seems logical.
If they are not opening at all when the car is warmed-up and the primaries are opened wide and held there, then he probably has a bad secondary diaphragm and/or a warped diaphragm cover.

The secondary diaphragm is mounted at the rear/back of the main body. It has a conical spring mounted in front of the diaphragm with the small end of the spring toward the cover. You must take care when mounting the lever to the back side of the diaphragm or it will not open! I use contact cement when installing a new diaphragm, so the edges of the diaphragm stay aligned with the screw holes and the vacuum port.

The diaphragm gets it vacuum signal from a “small” brass tube mounted in the air horn that points downward into the main body primary opening and is close to the air cleaner Bolt. The vacuum signal then travels through the long drilled port in the air horn, across the Secondary opening to the top of the diaphragm housing. The air horn gasket can be installed incorrectly blocking the vacuum signal. Check the small brass tube for being clogged. If the Diaphragm has not been replaced, I would, because the get stiff when old.

Check for correct alignment of the Secondary Link. If it’s bent it will no work good with the vacuum signal If all above is good it has to work!

How the diaphragm looks in relation to the spring.