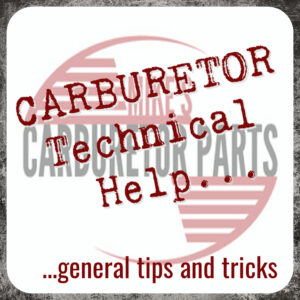 The following snippets are information that we have collected that might help you get past a problem, or better yet side step a problem. ——- Most problems being attributed to carburetor problems are usually caused by bad timing, worn spark plugs, loss of compression, poor fuel delivery, or a clogged air cleaner. Check these things 1st before tearing apart your carburetor.

How to remove a stuck check ball:

For specific information about your carburetor visit our Technical section for your particular carburetor.