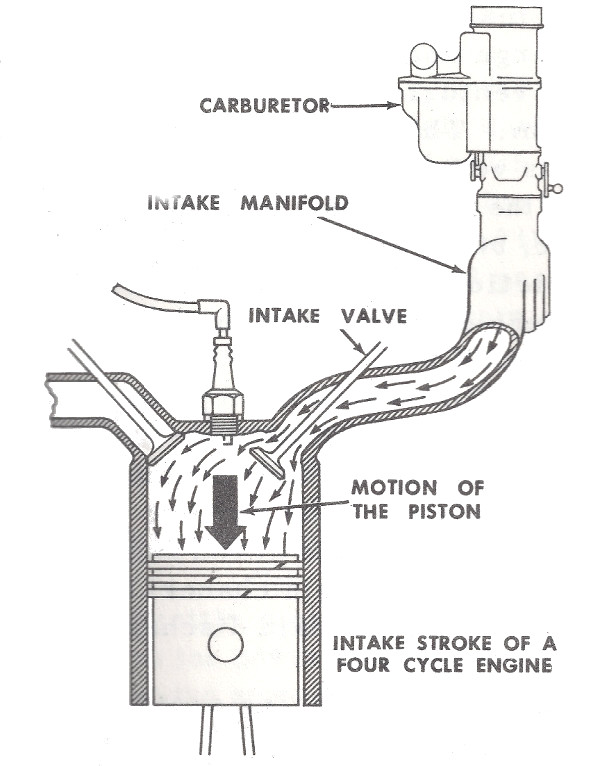 Purpose of the Carburetor
The carburetor delivers a combustible mixture of fuel and air to the intake manifold of the engine. It automatically controls the amount of fuel being mixed with the air to meet changing engine operating conditions, delivering a greater amount of fuel when high power output is required and less fuel for economical cruising.
The Engine
The effect of the engine upon the carburetor may be compared with that of a suction pump. As each piston moves downward on its intake stroke, a partial vacuum is created in the cylinder. This draws the fuel air mixture from the carburetor and intake manifold into the cylinder through the opened intake valve. fig 1
If an engine was intended to run at only one speed and load, its carburetor could consist of a simple nozzle spraying fuel from a gravity feed tank into the intake manifold. fig 2. Once the rate of flow of the fuel was adjusted to give a satisfactory mixture, no change would be necessary. 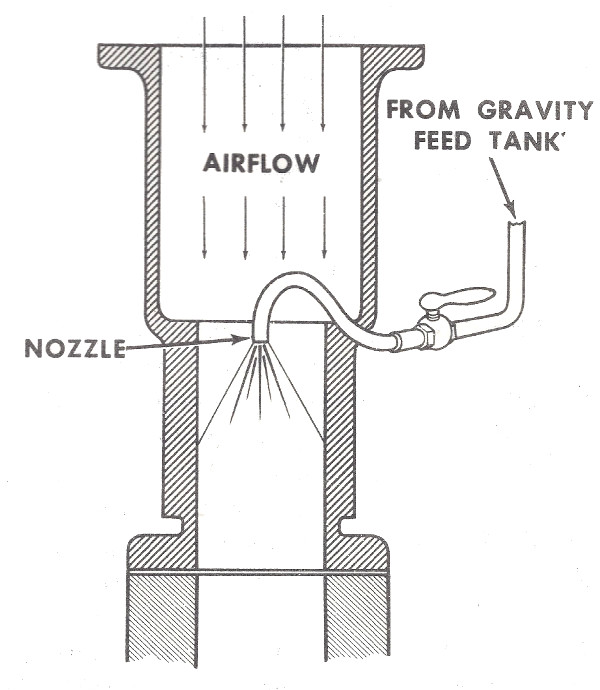 The fuel supplied to the cylinders must be vaporized to burn completely during the power stroke of the piston. Fuel which enters the cylinders in liquid form burns too slowly and is wasted. Vaporization of the fuel discharge is aided by air bleed passages which introduce air into the stream of fuel before it is discharged. This emulsion of fuel and air responds more readily to any change in vacuum and vaporizes more efficiently when it is discharged. 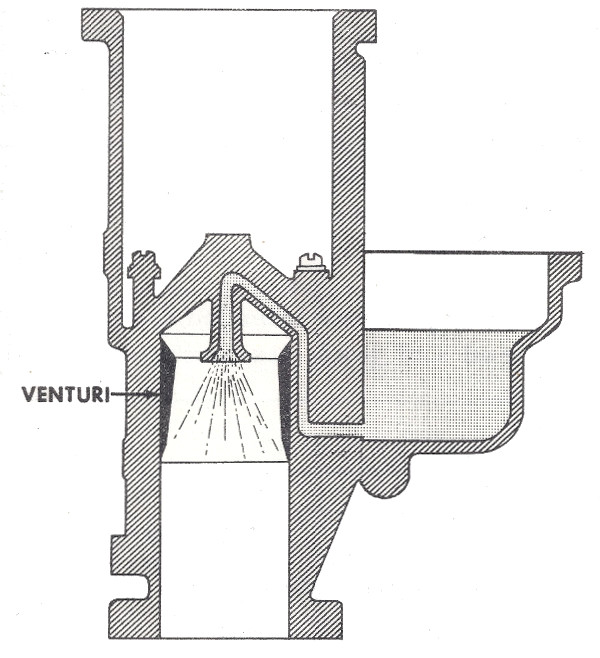 The throttle plate in the carburetor bore governs the power output of the engine by regulating the amount of fuel air mixture admitted to the intake manifold. It is controlled by the driver of the vehicle through the accelerator pedal. 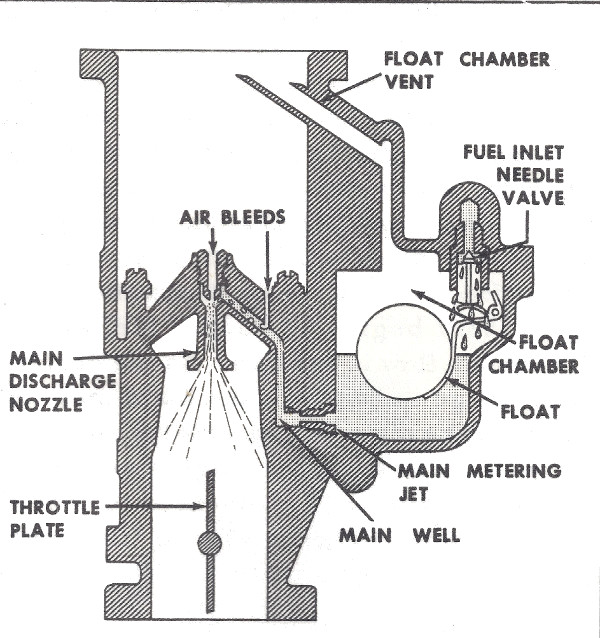 Figure 5
Low Power Operation
At idle and low speeds, the air flow through the carburetor is greatly reduced and the vacuum in the venturi is too weak to draw fuel from the main metering system. The nearly closed throttle plate restricts the flow of air into the engine, resulting in a strong manifold vacuum. 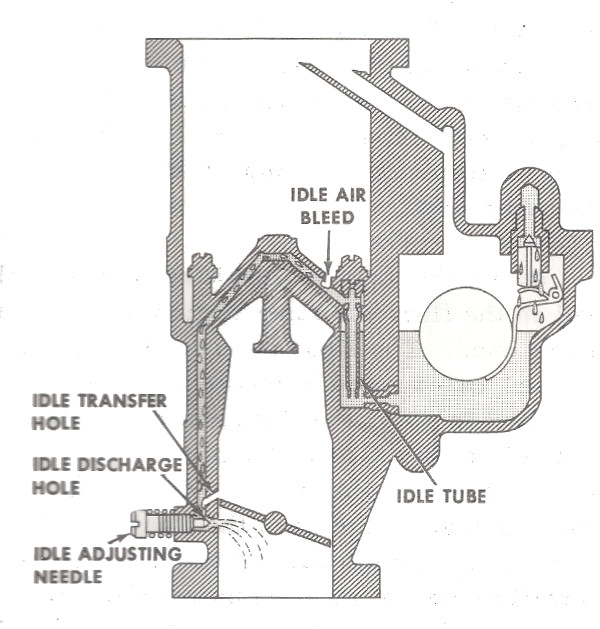 Fuel distribution in the manifold is usually not as efficient at idle and low speeds as it is in the normal cruising range. The idle system delivers a rich mixture so that all cylinders will receive enough fuel. The mixture at idle can be adjusted to meet the needs of the individual engine by setting the idle adjusting needle. The idle adjusting needle controls the amount of fuel discharged at the idle discharge hole only. This determines the mixture ratio delivered at idle.
Off Idle Operation

When the throttle plate is moved past the idle transfer hole, exposing it to manifold vacuum, fuel is also discharged from this hole. Otherwise, the idle system funcitons the same as is explained in paragraph 9. As the throttle plate is opened wider and engine speed increases, the main metering system begins to supply fuel and the idle system flow is reduced. As the cruising speed range is reached, the main metering system takes over completely, supplying all the fuel needed for engine operation. The two systems are engineered to provide a smooth gradual change with not flat spots in off idle performance.
High Power Operation
When the load on the engine is great enough to require high power output, the mixture must be enriched to approximately one part of fuel to twelve parts of air by weight. This mixture, while not as economical as the one to sixteen ratio delivered for normal cruising, enables the engine to develop full power output at all speeds above the idle range. The power enrichment system automatically supplies the added fuel only when it is needed.
The Power Enrichment System

The power enrichment system is actuated by manifold vacuum, which gives a true indication of the power demands placed on the engine. When a high load is placed on the engine, an above normal opening of the throttle plate is necessary to maintain speed. The open throttle plate offers less resistance to engine suction and the manifold vacuum is reduced.
Manifold vacuum is transmitted through the vacuum passage in the carburetor to the piston in the vacuum chamber. The vacuum acting on the piston at idle and normal cruising speeds is strong enough to hold the piston up in the vacuum chamber, compressing the spring on the piston stem. When high power demands reduce manifold vacuum beyond a predetermined point, the spring expands to force the piston and stem assembly down. This depresses the pin in the center of the power valve, opening the valve. Fuel from the float chamber flows through the center of the valve and out calibrated holes in its side. These holes meter the fuel flow to provide the necessary enrichment. The fuel flows through a passage to the main well where it joins the fuel flow in the main metering system, enriching the mixture for full power. In the dual carburetors used on V type engines, one power valve supplies fuel to both main wells. A restriction is added in the fuel passages leading to the two main wells to assure that they both recieve the same amount of fuel from the power valve. 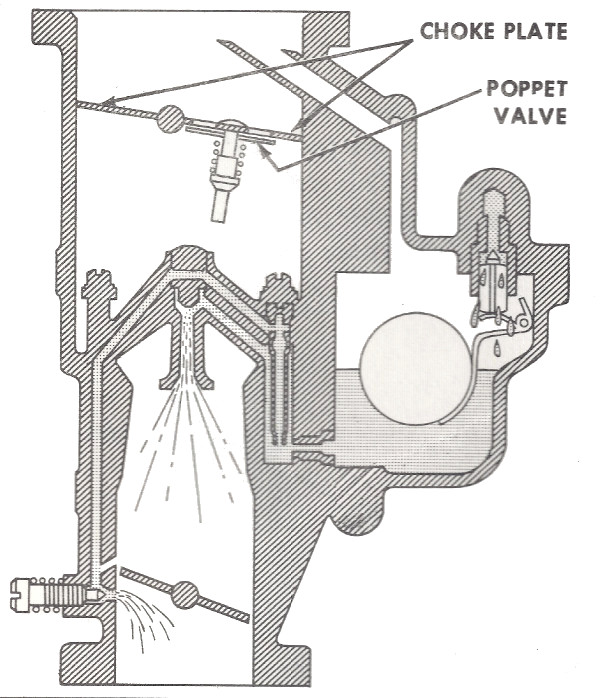 Figure 7
Acceleration
When the engine is accelerated, there is a slight lag in response of the previously described systems. Gasoline, being heavier than air, is more difficult to move. The air flow responds almost immediately to a suddenly opened throttle, but there is a brief interval before the fuel in the narrow passages can gain speed and maintain the fuel air balance. The accelerating pump system operates during this period, supplying the necessary fuel until the other systems can again provide the proper mixture.
Accelerating Pump System

The accelerating pump is linked to the throttle operating mechanism so the pump will operate when the throttle opening is increased upon acceleration. When the throttle is closed, the pump piston is up in the well and fuel enters the well through a passage from the float chamber. The pump inlet ball check valve permits fuel to enter the pump well but prevents a reverse flow of fuel when the pump is operated. The pump operating rod, which is linked to the throttle lever, moves downward as the throttle is opened. The horizontal arm at the top of the pump operating rod slides down in the slot in the pump piston stem, compressing the pump spring. The spring presses the pump piston down, forcing fuel through the passage to the pump discharge needle valve. The fuel, under pressure from the pump piston, unseats the pump discharge needle valve and flows past it and out the pump discharge nozzle. The pump discharge needle valve closes the passage when the pump is not discharging fuel. In addition to preventing fuel from being drawn from the pump well by the suction of the airstream at high speeds, the needle valve seals the passage so that air will not be drawn into the system when the throttle is again closed and the pump piston is raised to draw in another charge of fuel. The narrow passage in the pump discharge nozzle is a calibrated restriction which provides a resistance to the flow of fuel. The resistance opposes the pressure of the pump spring to prolong the discharge for smoother engine operation.
Cold Starting
When starting a cold engine, much of the atomized fuel from the carburetor condenses to a liquid on contact with the cold surfaces of the intake manifold. The fuel in liquid form burns too slowly in the cylinders, causing loss of power and stalling.
The choke provides a means of enriching the fuel discharge so that enough vaporized fuel reaches the cylinders to permit the engine to run smoothly during the warm up period.
The Choke

Closing the choke plate in the carburetor air inlet confines the strong manifold vacuum within the carburetor. The normal pressure of the air in the float chamber forces fuel through the idle system and main metering system, resulting in an increased fuel discharge to the engine. When the engine starts, manifold vacuum draws enough air through the poppet valve in the choke plate to prevent flooding the engine. A fast idle linkage between the choke and throttle operating mechanisms provides a greater throttle opening at idle during choking, increasing idle rpm to prevent stalling. The choke enriches until the manifold is warm enough to prevent condensation of the normal fuel discharge. Then, choking is no longer necessary.
During the warm up period, the choke should be gradually moved toward the wide open position, reducing the degree of choking as the temperature of the intake manifold rises. As manifold temperature rises, less vaporized fuel is condensed to a liquid before reaching the cylinders. Consequently, the mixture does not need to be enriched as much as when the engine was started. Also, the engine does not require as rich a mixture at higher speeds as it does at idle. The airflow through the carburetor provides a force which automatically controls the degree of enrichment for varying engine speeds during intermediate choke settings. How this is accomplished is explained in the next paragraph.
On most models, the carburetor choke lever is not directly connected to the choke shaft. Instead, at the end of the choke shaft there is a small lever which terminates between the edges of a V shaped notch in the choke lever. When the choke lever is in either the full open or full closed position, one edge of the notch holds the choke shaft lever firmly in the required position. However, at any intermediate choke lever position between the full open and full closed positions, the V shaped notch allows the choke shaft lever a limited range of movement. A spring attached to the choke shaft lever and anchored to the carburetor tends to hold the choke plate toward the closed end of this limited range. The choke shaft is offset from the center line of the choke plate, thus presenting a larger portion of the choke plate on one side of the shaft to the airflow through the carburetor. This tends to open the choke plate against the tension of the spring as the airflow increases with increasing engine speed. The tension of the smaller airflow at low engine speeds to decrease the choke opening. The spring tension opposing the variable force acting on the offset choke plate provides automatic control of the choke plate opening for various engine speeds during partial choking operation.