The Carburetor Idle Circuit and Adjusting the Idle Mixture 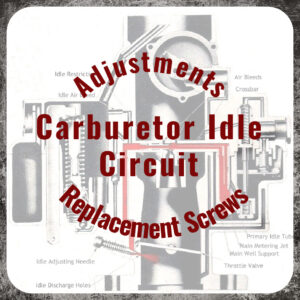 For Rochester Quadrajets pick up an idle mixture adjusting tool at most auto parts stores. The tool bends which will make adjusting easier.

DURING REBUILD
Clean the existing screws by buffing them carefully to remove residue. Inspect the tip and thread carefully for grooves. Replace any screw that shows signs of wear or damage.

When assembling the carburetor, turn the idle mixture screws in all the way, gently seat, then turn it out about 1 1/2 turns. DO NOT OVER TIGHTEN, YOU’LL DAMAGE THE SCREW.

FINAL ADJUSTMENTS
Bring the engine up to operating temperature.
Make sure the choke valve is completely open.
You may have to rev the engine slightly so that the fast idle cam moves to the idle position.
Adjust the idle to specification.

There are a couple of ways to adjust the idle mixture.

2. By ear
Turn the mixture screws, alternating between the two in 1/4 turn at a time until the engine rpm starts to drop, then turn them back out 1/4 of a turn.

TROUBLESHOOTING
When adjusting your idle mixture screws doesn’t seem to change the engine rpm much, it is an indication that there is something wrong and the carburetor may need a rebuild.
Common problems include:
PURCHASING REPLACEMENT SCREWS
Idle mixture screws can rarely be identified by carburetor number or type and instead need to be compared using the taper style and overall length of the existing screw.
Our website includes detailed photos of the idle mixture screws that are available and their overall length.
You will also need springs for most idle mixture screws, with a few exceptions all of our screws are sold with springs.