To ensure proper starting and driving during cold weather operation, the Model “BC” carburetor employs a fully automatic choke. (As shown in Figure 2-6.) This choke system is composed of a thermostatic coil, choke piston, offset choke valve, and fast idle cam and linkage. It is controlled by a combination of intake manifold vacuum, airflow past the offset choke valve, atmospheric temperature, and exhaust manifold heat.

The bimetallic thermostatic coil is made up of two metals with different coefficients of expansion. This coil is mounted firmly on one end to the stat cover and is linked on the other end to the choke valve shaft. The coil is so calibrated as to hold the choke valve in the closed position when the engine is cold.

As the engine is started, air velocity against the offset choke valve causes the valve to open slightly against the torque of the thermostatic up the passage in the plunger head and return to the float bowl. 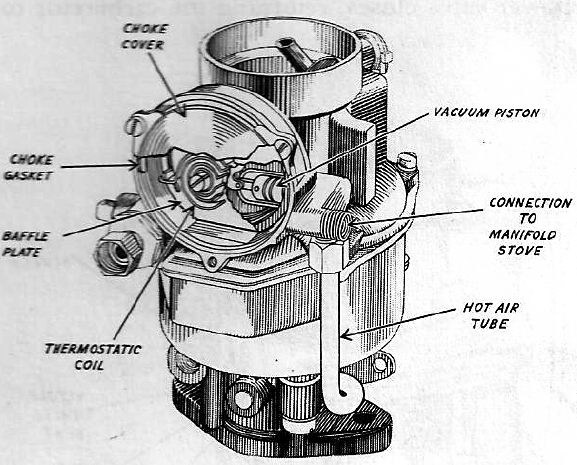 In addition, as the engine starts, intake manifold vacuum is applied to the choke piston, which also tends to pull the choke valve open. As a consequence, the choke valve assumes a position where the torque of the thermostatic coil is balanced against the vacuum pull upon the choke piston and air velocity against the offset choke valve, thereby causing a regulated airflow into the carburetor which provides a proper mixture during the warm-up period.

During warm-up, the choke piston serves to modify the choking action to compensate for varying engine loads or acceleration. Any acceleration or increased road load decreases the vacuum exerted on the choke piston. This allows the thermostatic coil torque to momentarily increase choke valve closure to provide the engine with a sufficiently richer mixture for acceleration.

As the engine warms up, hot air from the exhaust manifold “stove” is drawn into the thermo-static coil cover by the vacuum behind the choke piston. This hot air causes a rise in temperature which causes the coil to slowly relax its tension. Thus, the choke valve is allowed to move gradually to the fully open position.

To prevent stalling during the warm-up period, it is necessary to run the engine at an idle speed slightly higher than that for a warm engine. This is accomplished by the fast-idle cam which is linked to the choke valve shaft and holds the throttle valve open sufficiently during the warm-up period to give the increased idle RPM, until such time as the choke valve moves to the fully open position.

While the automatic choke is in operation, the driver may wish to advance the throttle to the full-wide open position. Since this would decrease vacuum pull on the choke piston, thereby closing the choke valve, it is necessary to provide increased carburetor airflow by opening the choke valve mechanically.

To accomplish this, a tang on the throttle lever is made to contact the fast-idle cam linkage at wide-open throttle position so as to partially open the choke valve.

This will also relieve excess choking on starting by allowing more air to enter the carburetor when the engine is cranked with the accelerator held fully depressed. 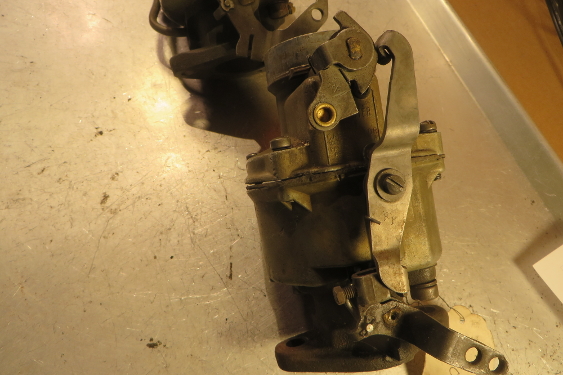 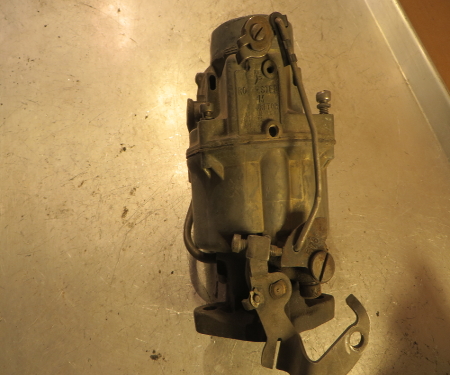 When your carburetor is idling too fast, it means the throttle valve is more open than it should be.

Adjust the idle with the engine at operating temperature.

Video about the fast idle and idling too fast:

Choke doesn’t open all the way.

The piston does not use any o-rings and is used only for the choke pull-down. Slightly opens the valve when cold and hitting the throttle. This keeps it from over choking.

You have another problem.

The valve should open fully when hot and throttle has been opened once. Sometimes the throttle can keep the choke from opening after warming up.

Stove pipe – should be connected to exhaust manifold. Check tube to see if it is getting hot.

There is a vacuum source that pulls hot air into the choke housing. This is located where the housing is mounted. It doesn’t take much vacuum.

Possibly the valve is sticking. Disconnect the linkage and feel the choke valve for any catching.