Gas is flooding over the top.

Bottom line is that you are getting too much fuel in the float bowl.
Can be caused by the following (could be other causes not mentioned).

Gas Boils Out After Turning Engine Off

This is called percolation. The float bowl top vent is used to relieve the fuel vapors from the float bowl, otherwise the vapors enter the carburetor bore causing a rich condition. Hard starting can also occur. The vent should open when the throttle is at idle position. 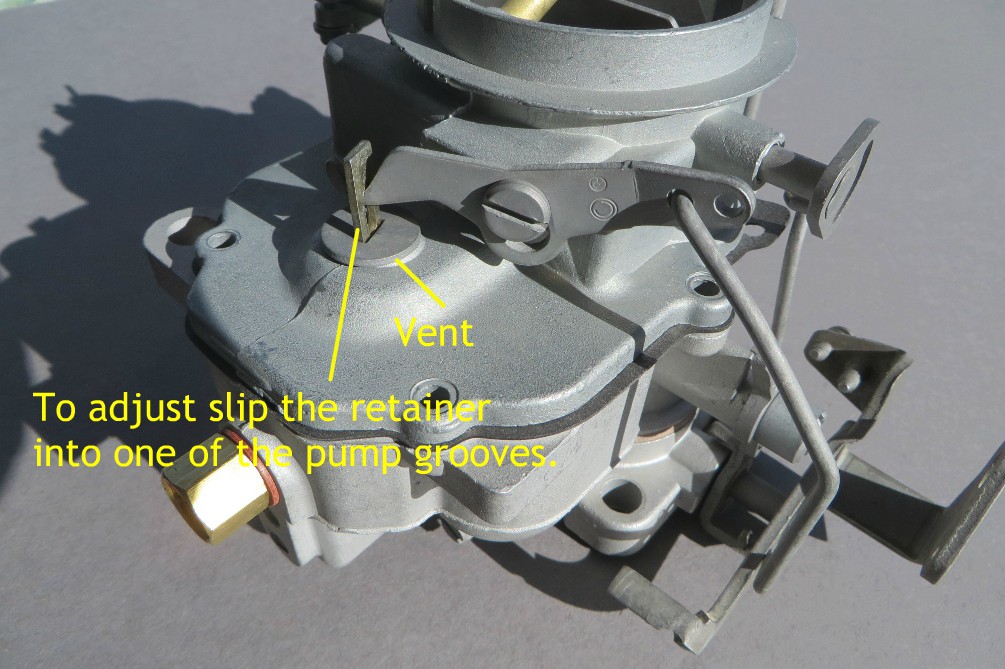 This is not the only reason for percolation. The engine may be getting too hot, gas has a lower boiling point that it used to. Try different brands and grades of fuel. Make sure fuel lines are away from the manifold. Run a 2nd line back to the gas tank which will help cool the gas. Add an electric fuel pump and use just before starting to re-fill the fuel bowl.

Coughs, or hesitates when stepping on the gas

Accelerator pump service may be in order if the engine stalls or hesitates accelerating at low speeds. A good tip to remember is that if an engine at operating temperature coughs through the carburetor and the air horn appears sooty, the mixture is probably too lean. An over-rich mixture could cause the engine to lag or hesitate but it normally won’t cough.

This can be caused by a warped air horn (bowl cover), which causes an air leak between the fuel bowl and venturi section.

Rough idle due to over rich condition on the subject units. Should such condition occur install a plug as show in the illustration. The plug should be driven to mating surface only.

For all drivability complaints, check all vacuum hoses to make sure they are properly connected. A disconnected hose can allow air leaks which give lean mixture as well as problems of improper action of the component operated by the hose. Also ignition contact point gap and ignition timing should be checked on al drivability complaints. Engine sags, die outs and pop back during warm up are usually caused by retarded ignition timing, improper carburetor choke vacuum kick adjustment, cam index setting, fast idle speed, and mixture setting.

On engines equipped with solenoid spark advance for starting check to make sure it is operating. To check disconnect leak to solenoid at bullet connector and energize solenoid momentarily with a jumper. The engine will speed up approximately 50 RPM and timing advance 7 1/2 deg if solenoid is operating.

The carburetor choke vacuum kick locates the choke blade in the best position for good engine operation during warm up. If die out occurs during warm up check the vacuum kick adjustment. The following picture and description illustrates and describes a typical procedure.

While applying light closing pressure on choke lever check blade opening with a drill or gauge as specified. Refer to shop manual for specific carburetor involved.

Note: A tolerance of +- .015″ on 6 cyl engines and +- .10 on v-8’s is allowed on vacuum kick and cam index settings to permit adjustments for best engine operation.

Engine idle speed and idle mixture should be adjusted to specification according to the emission control label on car.

Most of the above drivability complaints can be corrected by adjusting the basic ignition timing to specification, making certain vacuum advance is early enough, acceleration pump output is adequate and carburetor float setting is correct, and heat control valve is operating.

Basic ignition timing should be set to specification found on the emission control information label. It should be adjusted at specified RPM and with the vacuum hose to the distributor disconnected.

After setting initial timing, place carburetor throttle on step 2 of the fast idle cam. Check timing position, then reconnect distributor vacuum hose and note timing increase. If no increase in timing is noted, open throttle further until approximately 2500 RPM If no advance is noted check for vacuum at carburetor. If vacuum exists at fast idle, vacuum advance unit is defective.

If an exhaust analyzer is not available use the alternate procedure covered in the emission control label for the mixture adjustment. This will also assure correct throttle blade position.

The carburetor accelerating pump output can be check as follows:

If the above driveability condition exists in a vehicle the ignition timing should be checked and adjusted to specification and the vacuum advance checked for proper function.

In addition, carburetor high speed air bleeds and internal bowl vent should be checked to be sure they are open and not restricted, and carburetor float level set to specification.

If high speed persists the carburetor main jets and step up wires (if equipped), should be checked to assure that they are as specified for that particular carburetor.